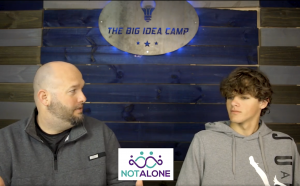 The Big Idea Camp was created in 2015 when Founder Jeremy Holbrook realized that many schools had eliminated arts and humanities programs and shifted their focus to state testing scores and the curriculum that fueled them. The change eliminated many of the subjects that promoted character development and leadership skills, which Holbrook believed to be essential for school-aged children.

To fill the gap in learning, The Big Idea Camp adopted the award-winning program Core Essentials and began partnering with schools in Kentucky, Ohio, and West Virginia to offer the curriculum free of charge. Core Essentials highlights values, such as courage, forgiveness, and trust, and teaches children how to treat others with respect, make smart decisions, and maximize their potential.

“A value is something we learn on the inside that becomes a behavior and changes the world on the outside,” Holbrook said. “We believe when values are adopted, children and students can become active members of their community. We aim to help schools speak encouragement into the lives of children so emotional, social, and psychological needs are being met and cared about.”

In the program’s early years, Holbrook conducted school assemblies in person to teach children the Core Essentials curriculum. As more schools partnered with The Big Idea Camp, assemblies became increasingly difficult to schedule and coordinate. That’s when Holbrook decided to produce quality lesson videos that could be shared with staff and students online. There was only one problem – he needed new equipment to write, film, and edit content.

Holbrook decided to apply for a capacity building grant with the Pallottine Foundation of Huntington. The $4,898 in funding The Big Idea Camp received enabled him to purchase a high-quality video camera and a new computer equipped with editing software.

Holbrook has since produced more than 80 Core Essentials videos that are available on Facebook and YouTube for school counselors, teachers, and students to view and share. In 2021, he added a weeknight video series to keep in touch with students and families during summer break.

During the COVID-19 pandemic when schools shut down, The Big Idea Camp continued to reach students and families through its online videos and coordinating activities, which counselors assigned to students through virtual learning. The program also debuted a special Homework Helpers series that enlisted local teachers to help children and parents solve virtual learning homework problems.

“The Big Idea Camp has been absolutely blessed thanks to the grant,” Holbrook said. “Not only did it set us up for success as far as widening our influence with local schools, but it also made it possible to better serve families during the COVID-19 outbreak. The technology upgrade opened doors for us to meet needs by utilizing video producing and social media content creation to create deeper connections with schools, families, and communities.”